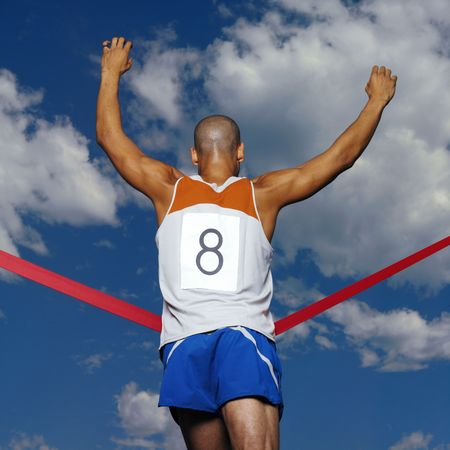 On Thanksgiving Morning, before I gorge myself on smoked turkey and creamy mashed potatoes loaded with gravy, I’m running a 10 Kilometer race.  It’s a distance I’ve run before, but this time I’ve set the goal to finish the race in under an hour.  I’ve never done a 10K in under an hour, but I feel fairly confident that this time will be different.  I’ve trained. I’ve put in the miles on the road outside my neighborhood.  I’ve done stair climbs to help me with the two quarter-mile hill climbs I’ll face toward the end of the race.  My weight is down, and my speed is up.  All of this will help me look at a clock that reads 00:59:59 or lower when I reach the finish line.

That finish line will also mark the end of a journey that started on January 1st,when I stepped on a scale and logged a starting weight of 323.4 pounds. On that day, I decided to live life differently.  I started eating a Ketogenic diet, exercising on a regular basis, and tracking everything. I knew that if I didn’t change, I was already on the way to joining the ranks of the morbidly obese men and women who died early in life.  Sure, I had tried to lose the weight before, with varying amounts of success, but this time I was determined to spend 2018 setting goals, reaching those goals, and becoming a healthier person.  I even set my focal word for the year as #fitness.

Now, I realize that the finish line on my healthy journey isn’t over when I cross the finish line on Thanksgiving.  I realize that if I allow myself to fall back into old habits, I can just as easily regain the more than 100 pounds I’ve lost.  I realize that food is still a crutch for me in a lot of ways, and binging at a buffet is easy when you see all the food you haven’t had in months. I know that even after Thanksgiving, I’ll have to diligently watch what I eat, and how much I eat.  I’m just setting that finish line as the end of my 2018 fitness journey, so that I can enjoy the holidays.  There will be a new journey in 2019, and it will require my new smaller physique.

Still, I have a few days left in this race, and it occurs to me that starting my healthy journey in January actually did something with the finish line of life that you can’t do when running a fixed distance race.  It moved it back.  It made it longer.  At least that’s what I hope.  There’s a bible verse in Corinthians that talks about running the race of life with perseverance.  To me, that means living intentionally, and trying to live for as long as you can. Persevere.  Find ways to move the finish line further away from your birth. Does that mean I’ll get 50, 60, maybe 100 years?  Who knows. But my much healthier lifestyle should help me make the mileage of my life increase exponentially.

That’s exciting.  I’m going to live longer.  I’m going to do more.  I’m going to face opportunities I never thought I would and come upon challenges I would have had to walk away from in the past.  Heather and I are about to go parasailing while cruising the Caribbean.  The weight limit is 250 pounds.  I could never have done it before this year.  I could never have ridden on a zip line in Jamaica or gone swimming with dolphins in Grand Cayman. But I am about to do all of these things and more simply because I moved my finish line.

I think I figured out how I did it.  I think I realized why I was successful in losing weight and getting healthier this year, when I have failed miserably in the past.  I think I understand this better now because I’ve been training for the 10K.  My health journey this year, is a lot like that race.  They’re similar because they aren’t easy.  They’re alike because they both take me out of comfort zone.  They’re comparable because they both required me to do some things I had to talk myself into.  I didn’t want to give up burger buns and French fries, in the same way that I don’t want to put running shoes on while it’s still dark outside.  Yet, if I want to cross the finish line of one race and move the finish line of another, then I had to do these three things.

And doing the work meant that I had to take a chance.  In reality, it probably meant that I was going to have to take more than one chance. For me, that meant trying a new diet I’d never tried before.  It meant exercising in ways that would use muscles I hadn’t used in years.  I had to take the chance that I could stick with a plan, and that I could work through the soreness.  I had to take the chance that I wouldn’t injure myself or get so frustrated with the food that I would cheat on the plan.  Signing up for the 10K meant I had to take a chance that I’d stick with training and would be ready to run that distance when the race arrived.

Because I did these two things with sincerity and commitment, a third thing happened; I was able watch for change.  I was able to step on a scale and see daily affirmation that what I was doing was working. I was able to look at my fitness tracker and see my run times become faster. I was able to buy new clothes because the old ones wouldn’t stay on anymore.  I’ve been through five belts this year.  I was able to go to the doctor, get blood drawn and see the best cholesterol and fasting blood sugar numbers of my life.  I was able to watch my body and my life change.

On Thanksgiving morning as I run 10 Kilometers I’ll be thankful for that challenge losing 100 pounds provided me this year. I’ll be grateful for chances I was able to take eating and exercising.  I’ll be blessed by the changes I’ve been able to go through.  I’m sure as I cross that finish line, in less than an hour, I think back to 323.4 pound Steve and wonder if he would have even tried to run this race. I’ll think about life and the race I’m trying to run with perseverance now, and I’ll know it’s a race worth running faster, stronger, and harder than it was in January.  It’s a race that’s helped me move my finish line.