I am a proud card-carrying member of the Fort Knox Spouses and Community Club. Before that the Marne Community and Spouses’ Club at Fort Stewart was home. Before that I knew very little about spouses’ clubs and chose not to participate. Several friends sent invitations, but I always said no. I didn’t think the clubs would be for me. Even though my nickname is Mr. Army Wife, and most of my friends are military wives, I didn’t think an official gathering of these remarkable ladies would have much to offer someone like myself. 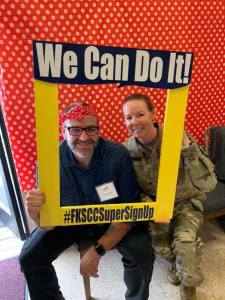 Heather and I at Super Sign Up. I’m Rosie the Riveter!

I was wrong. Incredibly wrong. Stupendously wrong. Ridiculously wrong. If I knew then what I know now, joining the spouses’ club would have been the first thing I did when I became an Army husband. The truth is I didn’t even join my first club willingly, I was kind of fooled into it. A board member asked me to work on one event, which turned into a board position. Bam! I’m in the club. Sometimes you have to look for opportunities. Sometimes they just find you.
After that first experience, I considered walking away. In fact, I did for a while. I’d made some friends, but they left. That’s the nature of our business. I volunteered with off post groups instead. I worked on my health and my personal interests. But I couldn’t stay away for long. While I loved what I was doing away from the military community, something was missing. There was one aspect of my life that I was losing. There was one thing that my brain just wouldn’t let me forget. YOU!

I am one of 640,000 active duty military spouses, and the other 639,999 are the most important reason I join the spouses’ club. They are my ride or die. They are my battle buddies. They go through the good times and bad times of military life, just like I have. They face challenges too intense to mention. Some have lived this life longer than me. Others are just starting to understand just how all of this works. But their length of military service doesn’t matter. Military spouses, past, present and future are forever united. And I join the spouses club because the club helps keep that bond strong.
We are a unit. Together we can accomplish anything. We can deal with any struggle. If you’ve been a military spouse for any length of time you know what I’m talking about. You’ve made a meal for a family in need. You’ve watched other spouses’ children when an emergency comes up. You’ve sat in silence with a friend because words won’t come and aren’t necessary. We are stronger together than we could ever be individually. The spouses and the opportunities presented in the spouses’ club has shown me that.
We are a unit. We accept one another unconditionally. The spouses’ clubs know no race, gender, religion, political affiliation or any other discriminating factor. In a world where people let personal proclivities rule their relationships, we accept one and all. Your significant other’s rank doesn’t matter. You don’t even need to be a military spouse. Most clubs around the world reflect this by calling themselves “spouses and community club.” We welcome you, no matter who you are, what you do, where you are from, or how long you want to stay. Come one, come all…there are no conditions on that. 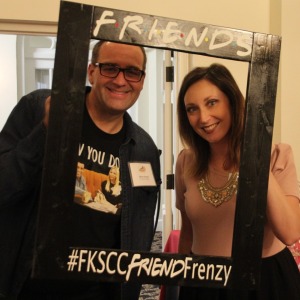 Making friends is what we do.

We are a unit. We’re nurturing because we care about your growth and development as a military spouse, and a member of the community both on and off post. We know that our involvement, whether it be in the lives of others, in on post groups, or in off post organizations help us just as much as they help those we are looking to support. They give us purpose during our time here. They provide friendships and opportunities we won’t find at other installations. Excuse me for borrowing an old Army slogan, but they help us be all the military spouse we can be. As members of the spouses’ club we nurture one another toward this goal.
We are a unit because we are invested in the lives of fellow members. While there is no “right” way to be a military spouse, there are tricks to make life easier for yourself, your Soldier and your family members. I learned a lot of these tricks by trial and error, but once I joined the spouses’ club, I learned a lot more because of the wives who’d been there before me. They took an interest in making sure younger and less experienced spouses didn’t have to make the same mistakes. Now, I get to pass on that knowledge. I invest in the lives of spouses and their families because at some point, spouses invested in me. 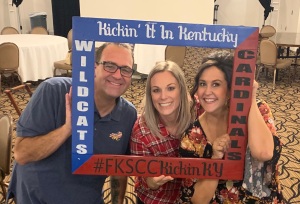 We are a unit because we are timeless. From Camp Followers during the Revolutionary and Civil Wars to the Spouses and Community Clubs of today, we remain steadfast in our commitment to the fighting men and women of the US Armed Forces. Whether it’s by cooking and cleaning, taking on your spouses’ responsibilities while he or she is deployed, or just being there when tragedy strikes, we remain committed and strong. If you’re like me and have read stories about spouses from the past, you would know they did the same things. They began the timeless legacy we live today.
You’re probably not surprised to hear a lot of people ask me why I join the spouses’ club. Most of the time, the questioner isn’t a member of the club. They’ve made up their minds, just as I once did. They don’t think it’s for them. They don’t think an organization whose membership is primarily female would be the place for them. They don’t understand that the club has something for everyone. They’ve never experienced all it has to offer. So now, when someone asks me, “Why did you join the spouses’ club?” I just say come and see. You’ll join too!