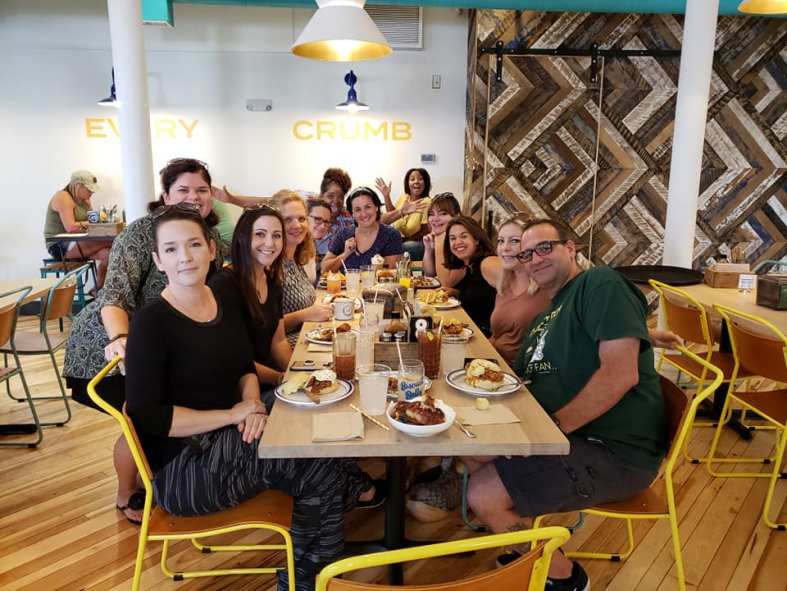 I don’t know if these statistics are still accurate, but they do paint a picture.  They show that a military spouse is a woman in her late 20s to early 30s with the proclivity to have a family.  They give us a snapshot of what we might see when we walk onto a military base. For the most part, if you went to a group gathering of military spouses, this is probably what you would see around the room.  But, in my mind it doesn’t answer the question.  What is a military spouse?

Maybe that’s not the right question.  Maybe he should be asking something else?  “What” is too general.  What is a military spouse?  It’s a person married to a servicemember.  There’s no information in that.  If you asked my civilian friend to draw a picture, chances are you will get the statistical picture above.  You’ll get the young female that is pregnant or holding hands with a young child. Again, there’s very little information in that.  It doesn’t tell you anything about the actually military spouse.  Maybe he’s asking the wrong question.  Maybe he should be asking “Who” is the military spouse.

I am a former Soldier.  Heather and I joined the Army together, four months before 9/11.  I completed my enlistment contract, while she decided to reenlist and become an officer.  I am a military spouse who finds joy in supporting her career.  I like cooking, cleaning and doing anything I can to take tasks off her plate.  I am a military spouse who, after 10 years of marriage, realized that making the bed every morning can be therapeutic and life changing.  I’ve made it ever since, and I know how to fold a fitted sheet into a perfect rectangle too.  I’ll do whatever she needs whether it means taking the dogs to the vet or switching cars for her oil change.  It is absolutely the very least I can do

I am a military spouse who’s spent time trying to figure out who I am as a military spouse.  After my four-year stint as an Army Broadcast journalist I did a lot of different things.  I was a bar manager, a morning show radio DJ, and a direct sales consultant. I have a Masters in Religious Education, am an ordained minister, but I refuse to go to church.  I’ve tried stand-up comedy, performed in musicals, and written plays.  I’ve learned that I love volunteering especially when it comes to causes related to female Soldiers or other military spouses.

The main thing, I’m a military spouse who is a pretty average American.  I like going to the movies and watching sports on TV.  I struggle with my weight because pizza and cinnamon rolls are delicious.  I believe politicians lie, the media is biased, but most people are good.  I’m a husband who doesn’t listen as well as he should, who wants to be left alone during the game, and who tries to avoid upsetting his wife at all cost.  It doesn’t always work because I don’t listen as well as I should and she sometimes needs things during the game.  I’m trying. In 19 years of marriage, hopefully I’ve gotten better.

As I look over my social media contact list, I can see that same sentiment in the dozens upon dozens of women and three men who share this military spouse life.  They are moms and dads.  They are Christians, Jews, Wiccans and atheists.  They are gay and straight.  They are full time employees and stay at home parents.  They are who they are, with the added benefit and struggle that comes with living in a military community, and they can’t be put into a box labeled military spouse.  What is a military spouse?  It’s a person.  Who they are? Most likely, they’re folks you should get to know.